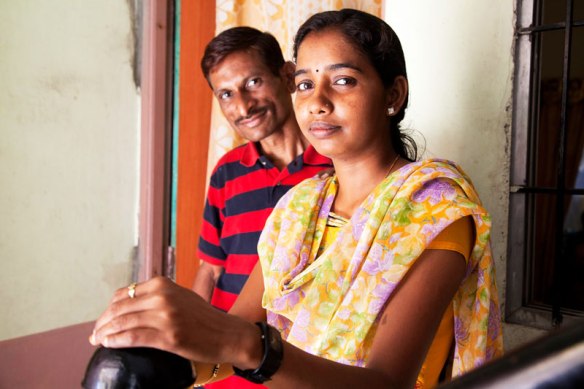 Women living with HIV are five-times more susceptible to cervical cancer than other women. (Photo by Prashant Panjiar for India HIV/AIDS Alliance)

Cervical cancer is the most common cancer among women in India, and the leading cause of cancer-related mortality. Women living with HIV (WLHIV) are at a higher risk of developing cervical cancer than women in the general population. Most significant reason for this is the high prevalence of persistent human papillomavirus (HPV) infection, which is known to be the causal agent for most cases of cancer of the cervix.

HPV has been found in over 99% of cases of invasive cervical cancer (Sankaranarayanan 2008) and like HIV, is sexually transmitted. The virus has more than 100 subtypes and it is estimated that more than 50% of the sexually active population globally is infected with one or more subtypes of genital HPV; however, the infection resolves by itself in most cases. Only a few high-risk subtypes (mostly subtype 16 and 18) can trigger abnormal growth in infected cells and lead to development of cervical cancer. HIV, smoking, multiple births, early initiation of sex and long-term use of hormonal contraceptives are other co-factors that increase the risk of progression from cervical HPV infection to invasive cancer.

A weakened immune system due to HIV puts WLHIV at a higher risk of HPV infection. There is evidence that WLHIV have a higher incidence of HPV infection, especially with cancer-inducing subtypes. They also have a higher viral load of HPV; and HPV infection progresses more rapidly to cancer in these women. Worldwide, infection with HPV among WLHIV varies between 55 to 30% (Clifford 2006). A recent study in 103 HIV positive women in North India (Pundhir 2014) reported co-infection with HPV in 24% cases and 10% of the population had cervical dysplasia (pre-cancerous lesions). In another study in Mumbai (Isaakidis 2013), HPV DNA was detected in 32% of the WLHIV studied.

With decreasing CD4 counts, the prevalence of HPV infection increases, the infection is more persistent and progresses rapidly. There is up to a 10-fold risk of having an abnormal pap smear among HIV-infected women than uninfected women, with a higher risk of these lesions progressing to invasive carcinoma. In a cross-sectional survey of 786 WLHIV conducted by Koshish, a  programme implemented by India HIV/AIDS Alliance to improve the sexual and reproductive health of PLHIV and most-at-risk populations, 5.6% had abnormal pap smear.

Globally, it is estimated that 500,000 women are diagnosed with cancer of cervix every year and 275,000 women die, with India contributing over a quarter of these deaths. This is particularly unfortunate as cervical cancer is preventable and curable if detected early. The development of cervical cancer takes about 12-15 years from the time of HPV infection. During this period, the abnormal cervical cells pass through several precancerous stages offering multiple opportunities for early detection.

With more than a million women living with HIV in India, who now have increased longevity due to improved access to anti-retroviral treatment (ART), more WLHIV are likely to develop cervical cancer. ART does not appear to have much impact on reducing progression of cervical dysplasia. Yet despite the fact that the country is facing a dual epidemic that is having a significant impact on the lives and health of women, India still does not have an organized screening programme for detection of cervical cancer. Lack of awareness among women, social power structures, lack of control of women over family resources, cultural taboos and silence over reproductive health issues make the situation worse.

Pap smear is the conventional screening method and has been successfully used in developed countries to screen women for cervical cancer, resulting in decreased incidence of the cancer in these countries. The test, though simple, requires trained cytology technicians and pathologists and good health infrastructure, and it is not widely available in India. Even in the places where the test is available, uptake of the test remains low because of low awareness, high associated cost, and multiple visits required to the health facility, since the test is not a point-of-care test. Moreover, the conventional Pap test is associated with high sampling and interpretation errors, leading to false negative results in 10-25% cases; and 30% of these false negative cases have been found to develop cancer cervix every year (Shingleton H, 1995).

Alternative screening approaches to pap smear, such as visual inspection with acetic acid (VIA) or Lugol’s Iodine (VILI) and HPV-DNA studies, have recently been considered for use in low-resource countries including India (Sankaranarayanan 2007, Isaakidis 2013). These studies have shown that VIA is more sensitive and the results become available immediately, allowing for the lesions to be treated during the same visit.  Recently, the Government of Tamil Nadu has introduced VIA testing in primary healthcare centres (PHCs) and has plans to scale-up to the entire state. Other low-cost rapid tests have been developed but not yet commercially available.

A higher prevalence of cervical cancer and an improved life expectancy of WLHIV with increased access to ART make a compelling case for initiating a well-organized regular screening programme. The American College of Gynecologists (ACOG) recommends cervical screening of HIV-positive women twice: a) once during the first year after HIV diagnosis and b) annual screening thereafter. Apart from introducing the screening at PHCs, there is an opportunity to integrate cervical cancer screening at India’s Integrated Counselling & Testing Centres, ART Centers and the STI clinics that support Targeted Interventions for HIV prevention among high risk groups, such as female sex workers. A network of these clinics is already established in all districts with high HIV prevalence; expanded services to WLHIV and most-at-risk populations that includes cervical screening and related services will help increase utilization of these clinics and improve health outcomes.

Finally, primary prevention of HPV will go a long way in reducing cervical cancer. Correct and consistent use of condoms is known to have reduced genital HPV infections, genital warts and cervical cancers. Recently, two vaccines, one quadrivalent (against subtypes 16, 18, 6 and 11) and one bivalent (against subtypes 16 and 18) have been developed that provide more than 95% protection against HPV. Suitable for both females and males, these vaccines are effective only if given before infection with these subtypes of HPV. The efficacy and safety of vaccine among HIV-positive women requires more research.

Echoing this year’s theme for International Women’s Day, equality for women living with HIV is progress for all. Increased investment in the overall health needs of WLHIV, including their sexual and reproductive health needs beyond HIV, will pay dividends for these women, their families and for society more broadly.

The author of this post, Saroj Tucker, is a medical doctor working in the field of HIV and SRH for the last 12 years.

With support from the Global Fund to Fight AIDS, Tuberculosis and Malaria, Vihaan is establishing 350 Care & Support Centres across India that will help expand access to services, increase treatment adherence, reduce stigma and discrimination, and improve the quality of life of PLHIV. The centres will support PLHIV, including those from underserved and marginalized populations who have had difficulty in accessing treatment including women, children and high-risk groups in 31 states and territories.

With funding from the European Union, our Koshish programme strengthens civil society organizations and networks that work with PLHIV and other marginalized groups, such as men who have sex with men, transgenders, sex workers and people who inject drugs, to effectively advocate for policies to improve the sexual and reproductive health and rights of PLHIV in India. This programme is implemented in partnership with MAMTA, PWDS, VMM and CHETNA, along with state-level networks for PLHIV in Maharashtra, Tamil Nadu, Andhra Pradesh and Gujarat.